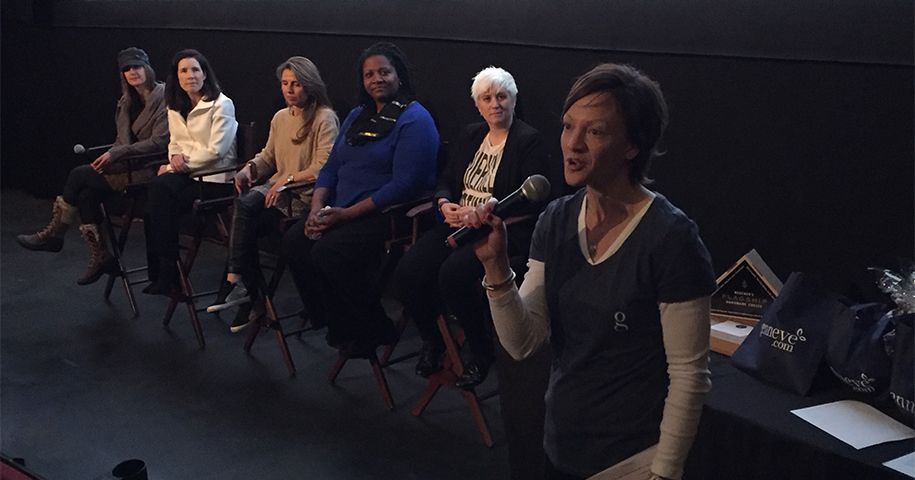 At Gennev, we love to celebrate female entrepreneurs

Everything was perfect: the cozy/cool venue of SIFF Cinema Uptown, that wonderful smell of movie theater popcorn, SIFF’s outstanding staff doling out wit and wine. You know it’s going to be a good night when the laughter starts in the lobby.

Generous sponsors had provided all sorts of goodies, so by the time everyone had filled up their goodie bags and made their way to the theater, the lights were starting to dim.

Jill, CEO and head Gennev-er welcomed everyone as we settled into our seats. Several folks mentioned it later, that you could feel the energy in the air. It wasn’t the excitement of knowing you’re about to see a really great movie, though that was certainly present too. It was the excitement of being on the cusp of something big. Of being a participant in something important and powerful and meaningful.

The Dream, Girl documentary explores the challenges of being a female entrepreneur: difficulties landing investment capital, lack of role models, even the well-intended but not always helpful advice from risk-averse friends and family. The women featured in the film are extraordinary for what they’ve accomplished, but they are also wonderfully, gloriously, human, mistakes and all. And this makes their success seem attainable for anyone willing to work hard and dream big.

As Dream, Girl producer Komal Minhas told me, the best way to experience the film is with a community, so you can talk about it after. So that’s what we did. We brought in a terrific panel of innovators, educators, and entrepreneurs to talk about their trials and triumphs in launching their business or in preparing the next generation of girls to take over the world.

The crowd asked great questions, including, “What were some of the mistakes you made?” Ally Svenson, co-founder of MOD Pizza, said her biggest mistake was “not having a healthy male ego.” She had a great idea she knew would work, but it took her three-and-a-half years to move forward. “It should have taken three-and-a-half months,” she said. Not having confidence in herself and her idea slowed her down—but it didn’t stop her. That business was hugely successful, and the next time she had a Really Great Idea, she went for it.

Leah Warshawski, producer and director of Big Sonia, admitted she makes mistakes pretty much every single day. “But,” she said, “as long as I learn something from it, I don’t really mind.” The one mistake she did regret, she said, was “not learning Excel sooner…”.

Another attendee asked how female entrepreneurs maintained their networks and did they think it was important to do so? The panel overwhelmingly agreed on how critical it is to find support and be support for others. Many female entrepreneurs face resistance and hesitation from well-intended friends and family, and that can be discouraging. Brenda Leaks, Head of Seattle Girls’ School, spoke about how her school makes it a priority to encourage girls to be support networks for one another from the start.

Jill asked the crowd if everyone who considered themselves an entrepreneur would stand. Between a third and half the crowd did, which explained why there was so much head nodding during the film and discussion, you could feel the draft.

And that’s why the atmosphere was so electric. We all understood the problems; we all saw the possibility of moving forward, together, towards solutions. Connections were made, right there and then, between innovators and entrepreneurs, between potential CEOs and someday-investors, among women who are ready for leadership and others ready for “followership,” as Brenda termed it. Our tribe is out there; now we begin the work of gathering and figuring out how we can make this rising tide lift all the boats.

“Loving the girl power.” We couldn’t say it better ourselves.